So I finally upgraded my camera kit.

I've been using the Nikon D7000 since late 2013 or early 2014 (I don't recall exactly).
Prior to that I was using an Olympus E-500 (my first DSLR, I don't recall exactly when I bought it) for serious pictures along with a little Nikon S6200 point and shoot when I didn't want to carry the Olympus.
In 2015 I upgraded the D7000 from the kit lens set to the Tamron 16-300mm F/2.5-6.3 Di II VC PZD (B016), then to the Tamron 18-400 F/3.5-6.3 Di II VC HLD (B028) last year (2019).
In the timeframe since upgrading the lens I've been working on decluttering and simplifying my gear collection, so I've given away the old lenses, the little Nikon PNS (that was rarely getting used), etc.
Early this year (2020) I picked up a Peak Design Everyday Sling V2 10L so I could carry my camera with me at all times, along with the normal tech stuff I want to always have on hand.
This has allowed me to shoot more often and catch opportunities I couldn't before (like the recent morning shots outside work).

Overall the D7000 has been a great camera for me, but the past couple years or so I've been wanting a couple things that I can't do with it:
1. Record my photo shoots with an on camera monitor/recorder
2. Record higher quality videos if I want to (the video quality is decent, but it doesn't do 4K, and the audio quality is..tolerable - I use a Zoom H2n as a mic if I need better audio)

The camera can't support an external recorder for 2 reasons:
1. It doesn't do clean HDMI out, so an attached video source sees all the info from the camera.
2. It's still a traditional shutter camera, and as such cuts the HDMI connection when taking a shot.

So this led me to considering upgrading to a mirrorless system.
This would solve Reason 1 for Issue 1 definitely, and should solve Reason 2 as well (still not 100% sure on this behavior, we'll find out when I get everything setup and tested in various ways).
There's also the fact that most recent mirrorless cameras do 4k internally, so Issue 2 would be solved as well (with the camera or the external monitor/recorder).

So my plan WAS to get a Nikon Z6 digital cinema kit that includes the Z6 Body, Nikon F to Z lens adapter, the Atomos Ninja V monitor/recorder, and various accessories and then add on the other standard accessories that are needed.
However, as I continued researching I realized that I missed a critical issue with that plan.
Even though I COULD use my existing lens with the Z6, using a DX format lens on an FX format body would lead to significant cropping behavior due to the sensor size differences.
This meant I would also have to invest in a new lens with approximately the same range, which would add another $900 or so onto the cost of the upgrade.
Obviously this did not seem to be a good plan anymore, so I started researching alternatives.

After more research and chatting with a photographer friend, along with researching things I'd heard at the latest B&H Optic conference, I decided to go back to my DSLR roots - Olympus.

So here's the new kit: 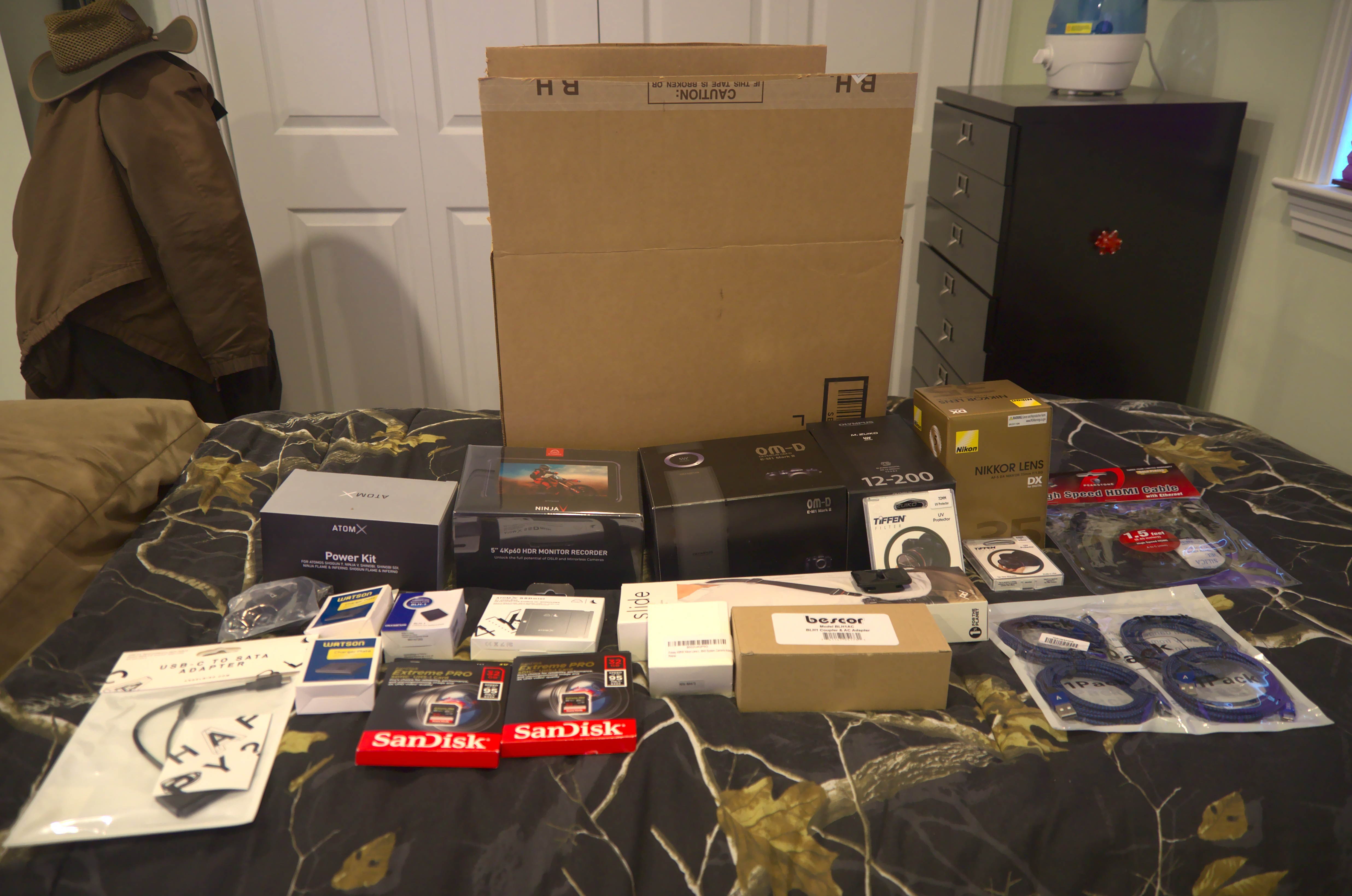 Olympus M.Zuiko Digital ED 12-200mm f/3.5-6.3 Lens
Tiffen 72mm UV Protector Filter (yeah I know, the UV isn't actually needed and protection is minimal, but it's still protection and keeps me from having to clean the lens directly)
B+W 72mm Circular Polarizer MRC Filter (Ordered with the new HDMI cable since I realized I really should be using one of these for many of my shots, so I'll test it out when it gets here)

Olympus BH-1 battery (because you ALWAYS need a spare!)
Watson Battery Plate Adapter for BLH-1 (I have a Watson dual plate battery charger)
SanDisk 32GB Extreme Pro SDHC UHS-I 2 pack
Bescor BLH1AC Dummy Battery and AC Adapter Kit (Not really a necessity but I like having the option to use wall power)
Peak Design SL-BK-3 Slide Camera Strap (I already had one on the D7000 and love it, so I had to get one for this too)
Peak Design Dual Plate (not purchased, I already had a spare - I primarily use the Peak Design Carbon Fiber Travel Tripod with it's native head but I have a nice Manfrotto video head I sometimes use instead of the native head)
Fotasy Manual Nikon Lens to M43 Adapter (It was $12...just for fun to see how my Tamron lens behaves on a smaller sensor camera)
XIAE USB C to USB A Cable (My main PC doens't have USB-C onboard and I needed more of these anyway so I ordered a 5 pack - turns out I didn't actually need this for the camera as the included cable is a USB C to A cable)

There are several reasons for this switch rather than just waiting longer and getting the Z6 with a lens.
1. Cost. I built out this full kit, including a lens (and all the normal accessories I forgot to include in the Nikon kit upgrade list) for the same cost I was planning for the Nikon upgrade kit (it also helps that a number of things were on sale, some significantly).
2. Size. Micro Four Thirds lenses tend to be a fair bit smaller and lighter than the ones for larger sensor sizes (see the camera side by side photos below!).
3. Features. While the Nikons have great features, there are a few that really stood out to me when researching the Olympus.
- FAST continuous shooting options - I almost always shoot burst with any possibly moving subject, and often with still subjects as well (I'm sure the Z6 options are fine as well for most uses, but the E-M1 has some crazy ones).
- Starry Sky Autofocus Mode - I occasionally try to dabble with astrophotography, so this will be very fun to play with.
- Weather Sealing - I've never used any of my cameras in so much as a light rain. Knowing that this system can handle nearly anything apart from full water submersion (and possibly even that if shallow enough) opens up a whole world of situations I've never shot in. (The Z6 might very well be weather sealed as well, I haven't actually looked, but this is a big point people bring up about the E-M1).

Bonus gains:
My D7000 is still a complete kit for use as a backup camera or secondary video camera (although 1080P only).
I did also pick up the Nikon AF-S DX NIKKOR 35mm f/1.8G Lens (and appropriate Tiffen UV Filter of course) for the D7000.
This will let me pack the D7000 as a fairly compact video camera or backup camera if I don't have room for the Tamron Lens, as well as opening up new shooting options for the D7000 (yes the Tamron covers 35mm, but not at f/1.8).


The first thing after getting a new camera and lens is, of course, to do a lens test/comparison shoot!

Side by side Zoomed Out (Nikon Left, Olympus Right) 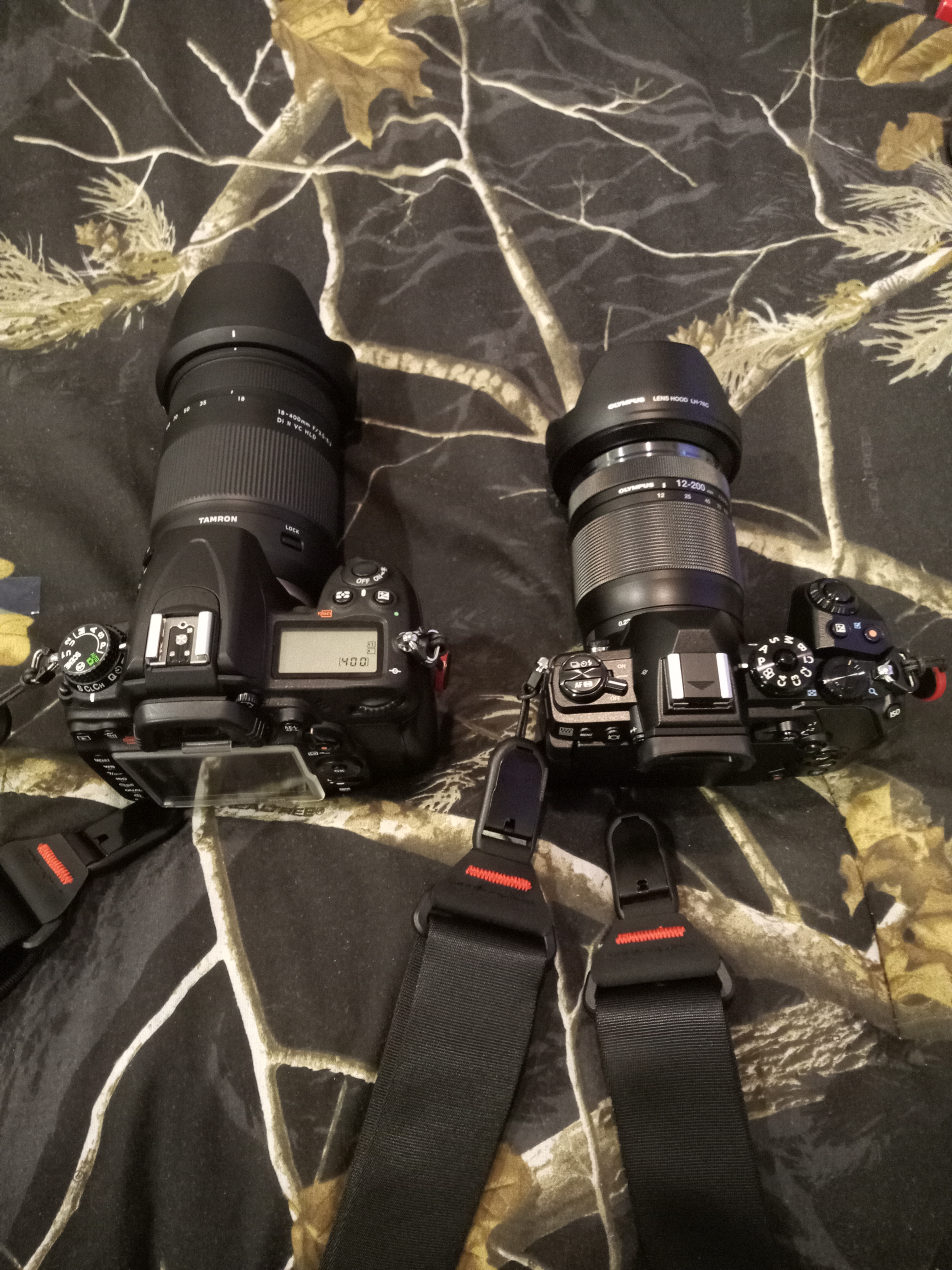 Side by side Zoomed In (Nikon Left, Olympus Right) 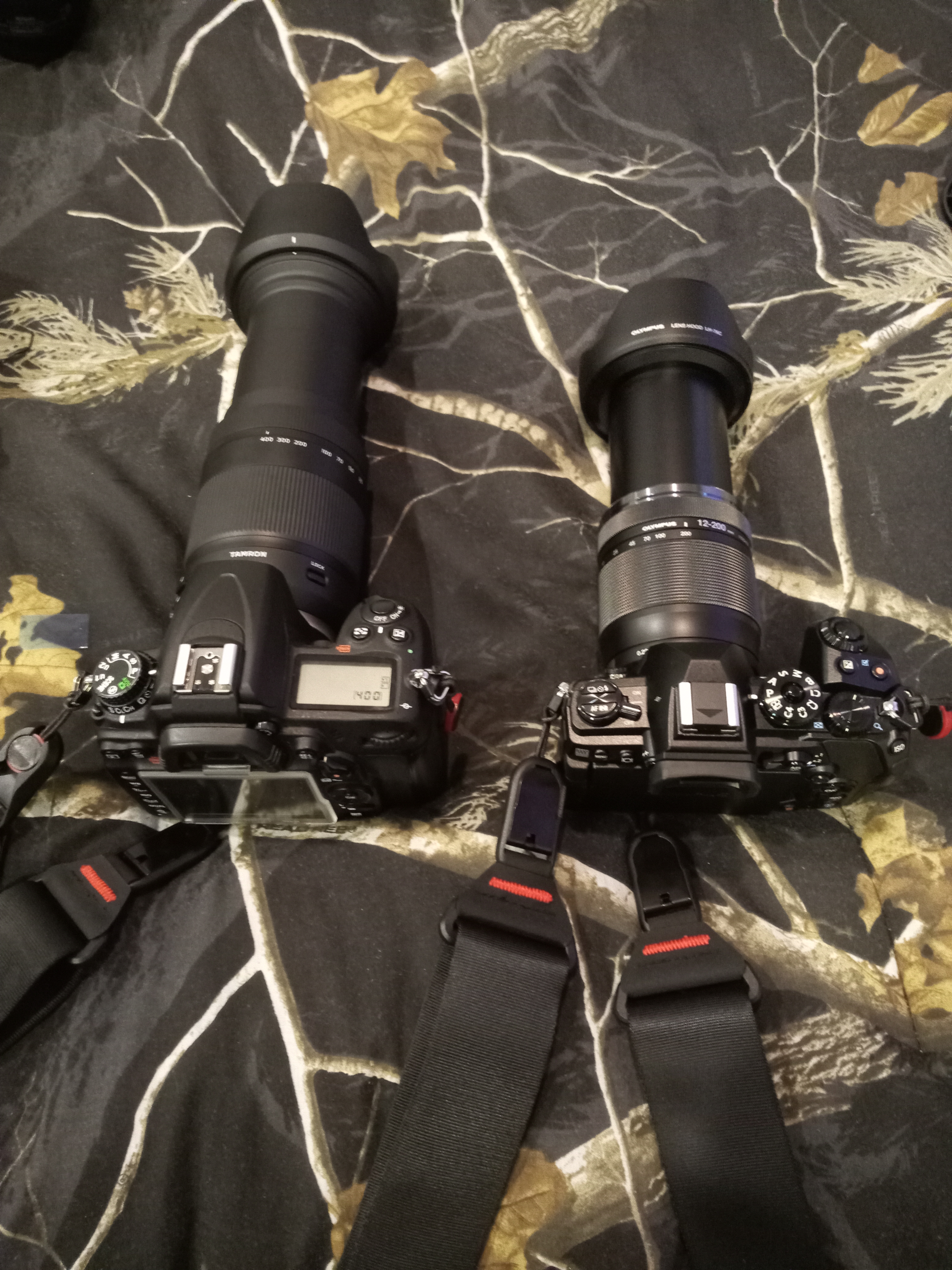 You can see the difference in the body and lens sizes.  The weight difference is fairly significant as well.

Lens Testing Methodology:
I setup the tripod (Peak Design Carbon Fiber Travel Tripod) across the room from my "subjects".
Cameras were left at their normal settings. The Nikon is at the settings I set years ago. The Olympus is at default OOTB settings other than switching it to RAW.
For lenses on their native bodies, shots were taken fully zoomed out and fully zoomed in with normal autofocus.
For the DX lenses on the Olympus body, lenses were mounted on the adapter and then set to manual mode and shots were taken fully zoomed out or zoomed in after quick focusing - no changes were made to camera settings.

Lens Test Image Processing Methodology:
RAW files were imported into Darktable.
My default processing preset was applied to all images (flat tone curve, exposure/brightness/contrast/etc. settings I like to start with).
Lens correction was changed to the correct lens.
Noise Reduction preset was applied.
Images were exported to jpg.

Lens Tests (yes I need to work on leveling my tripod): 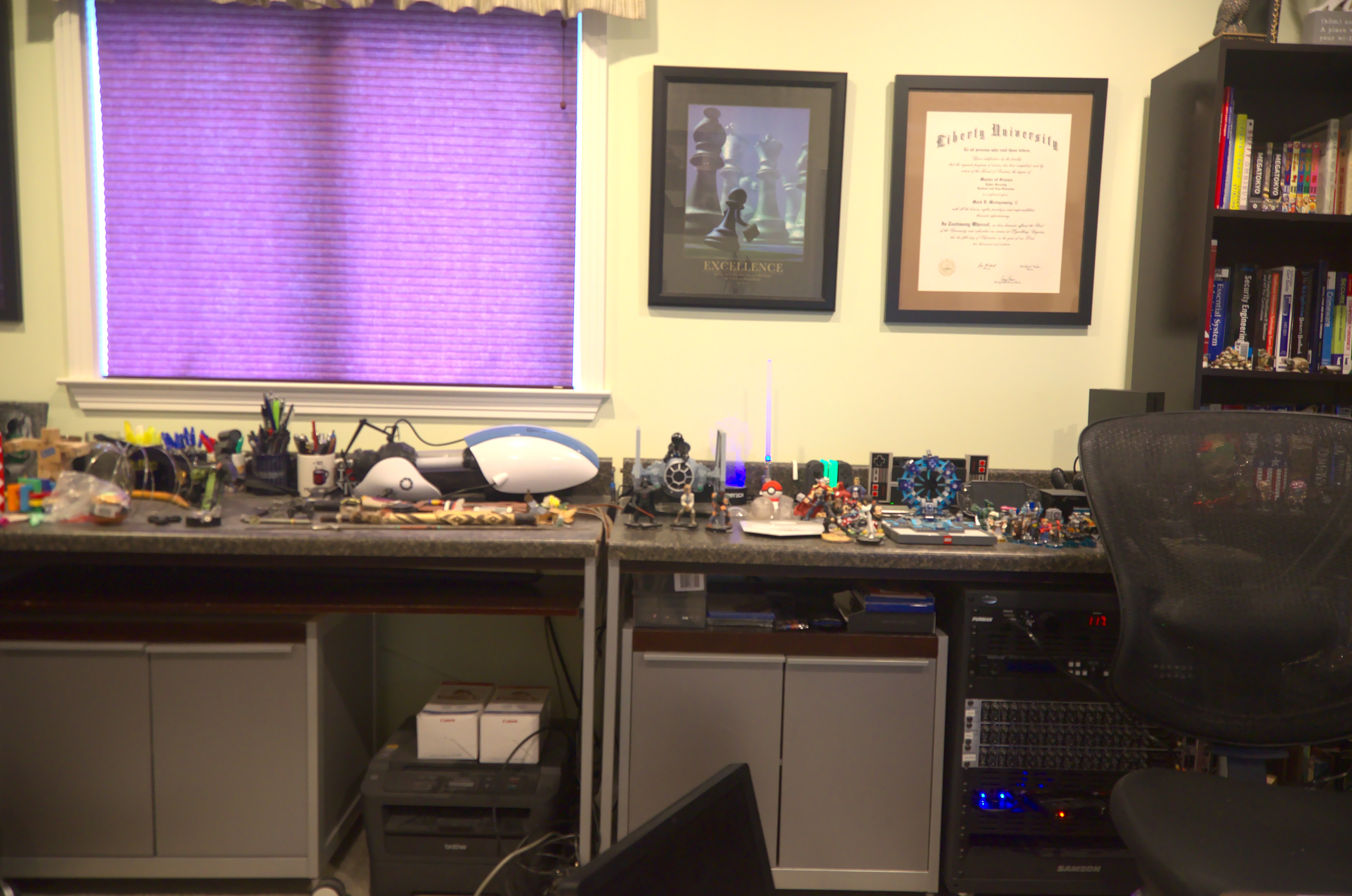 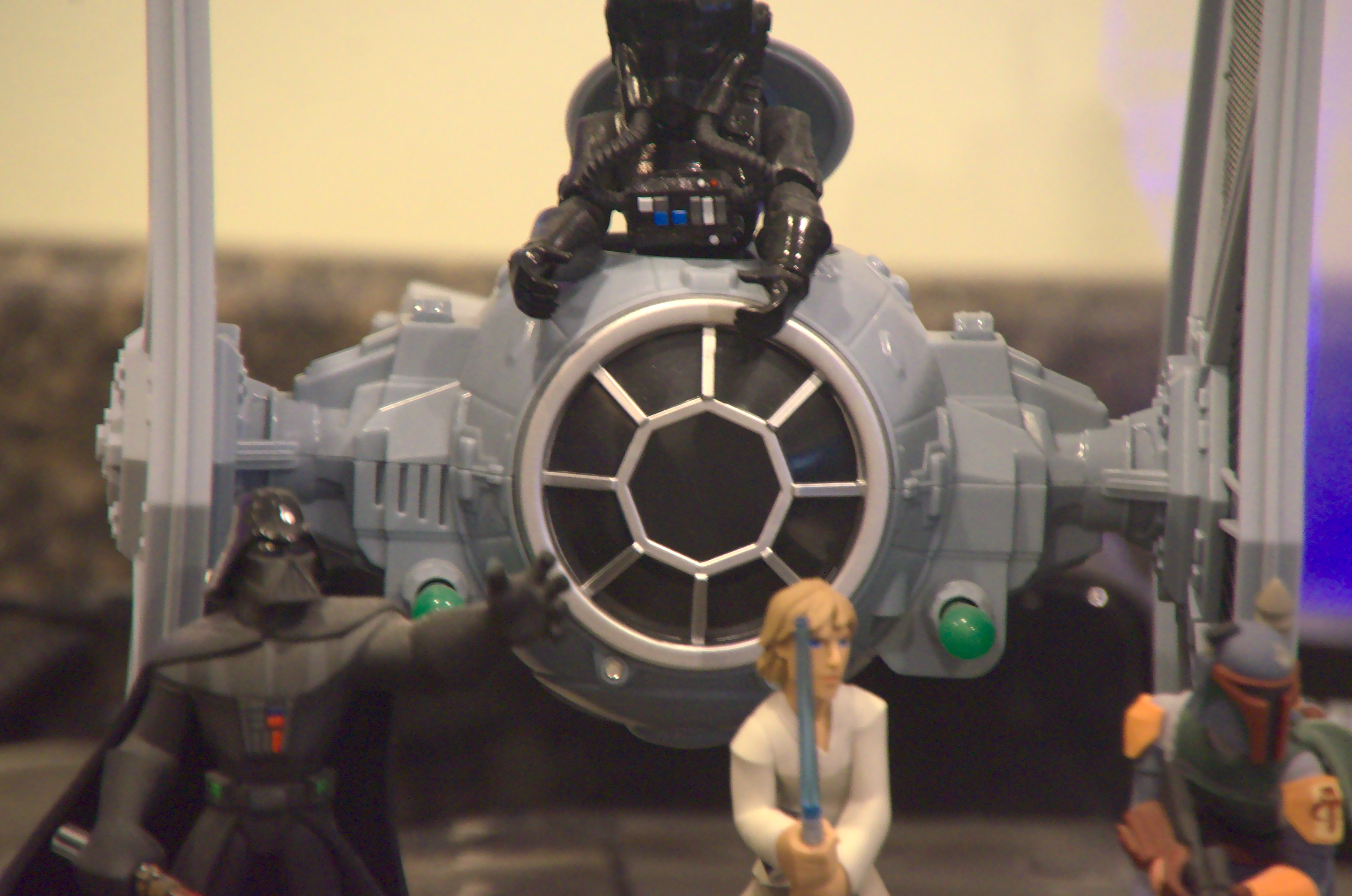 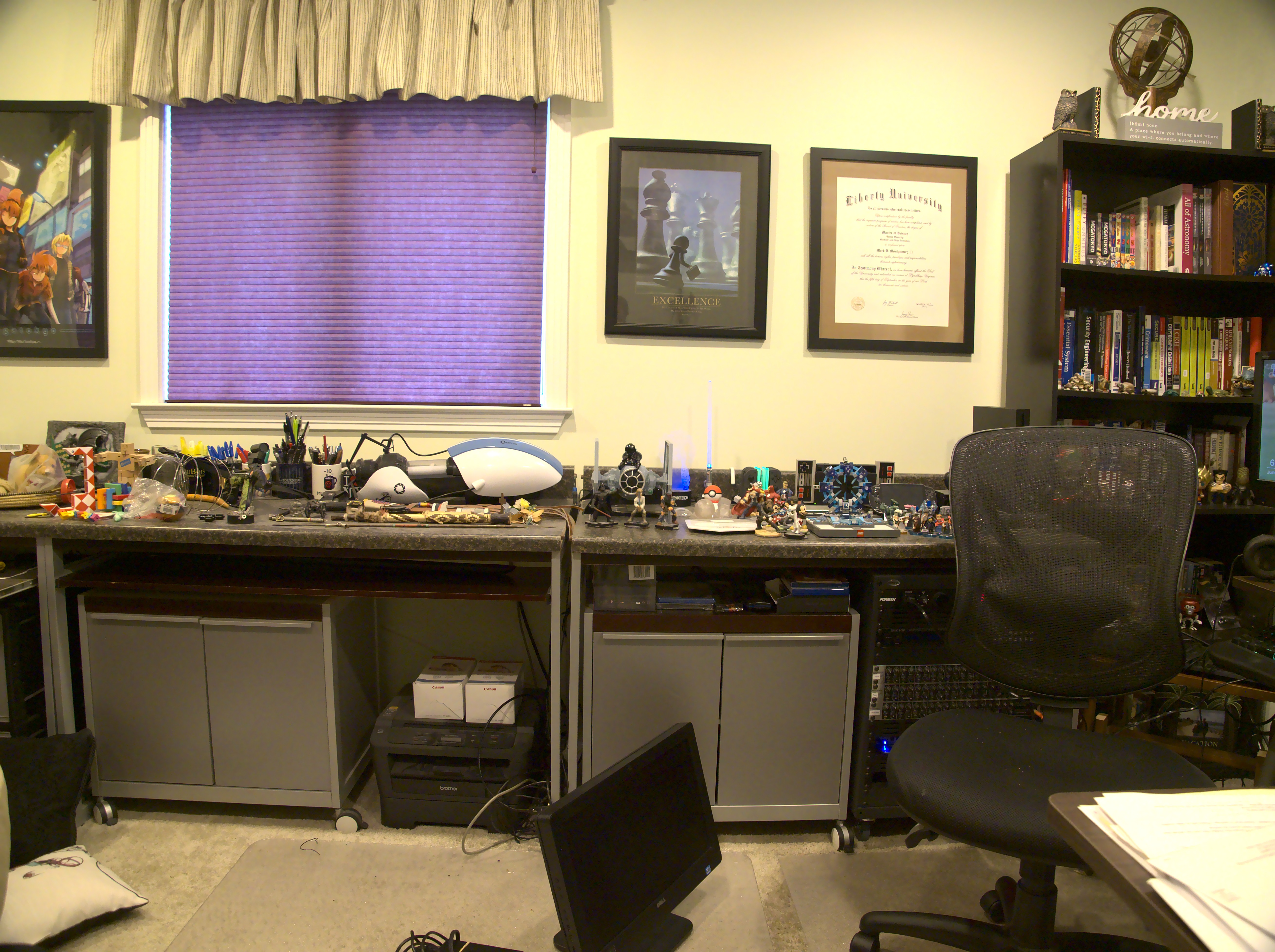 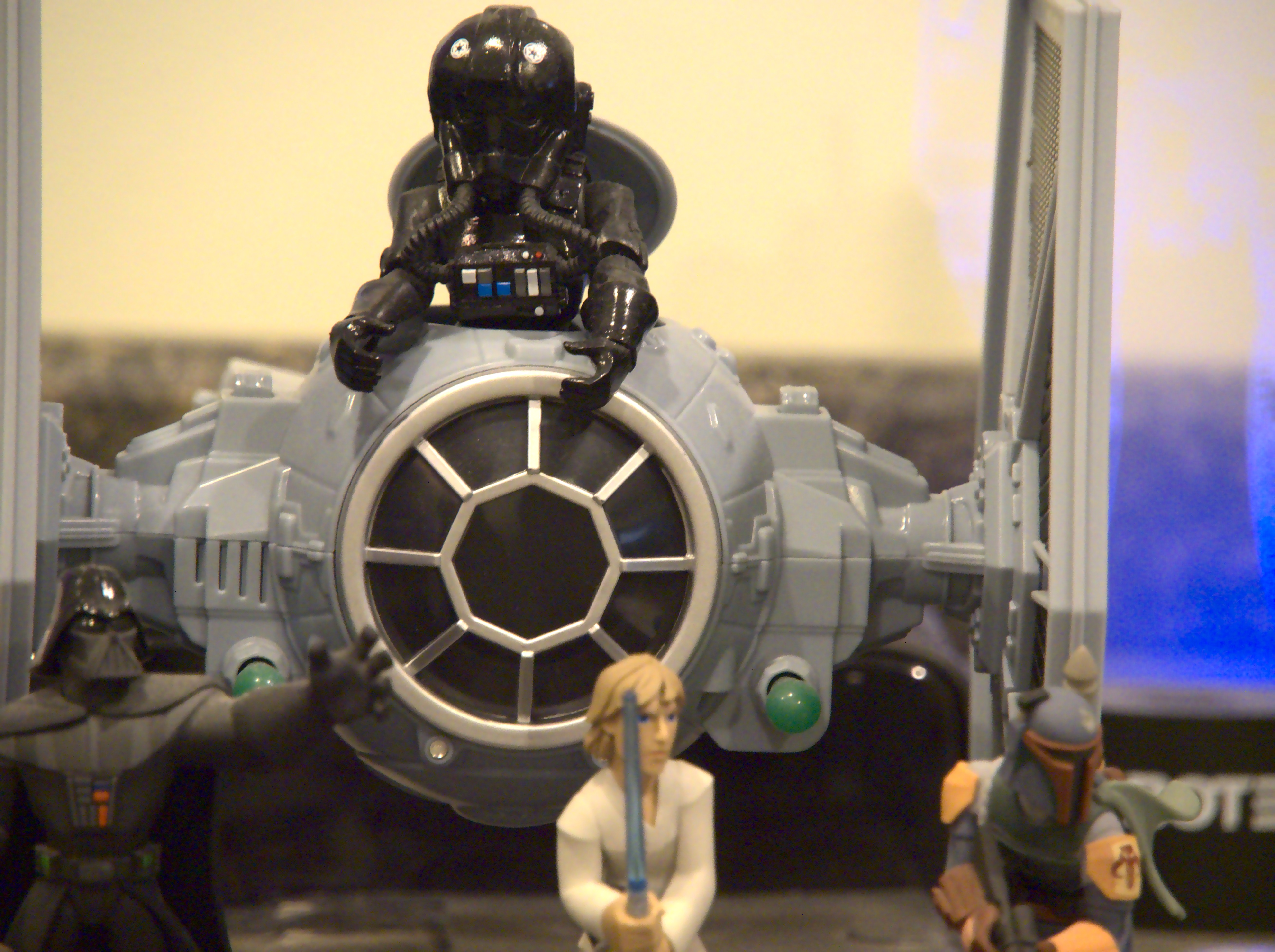 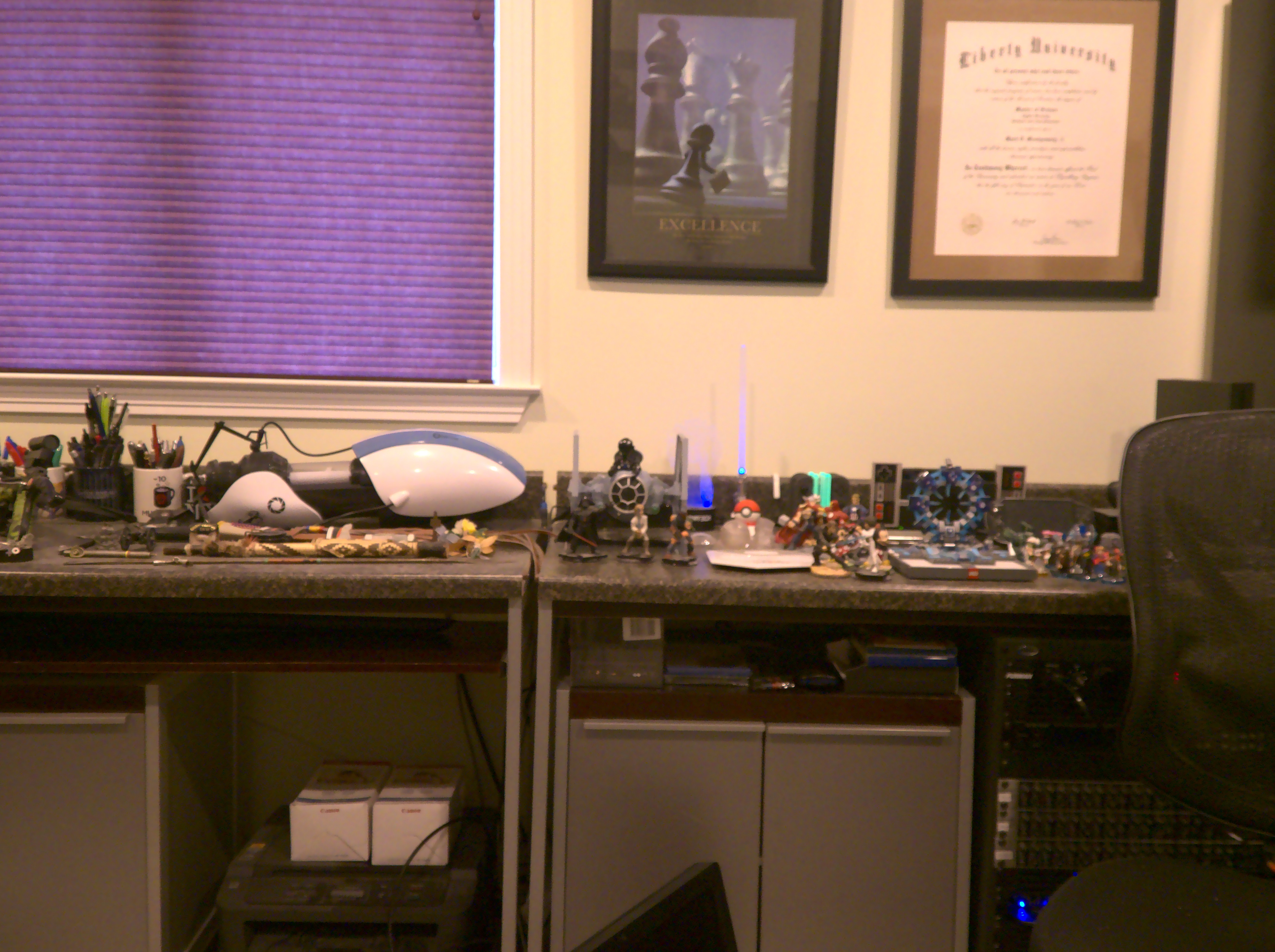 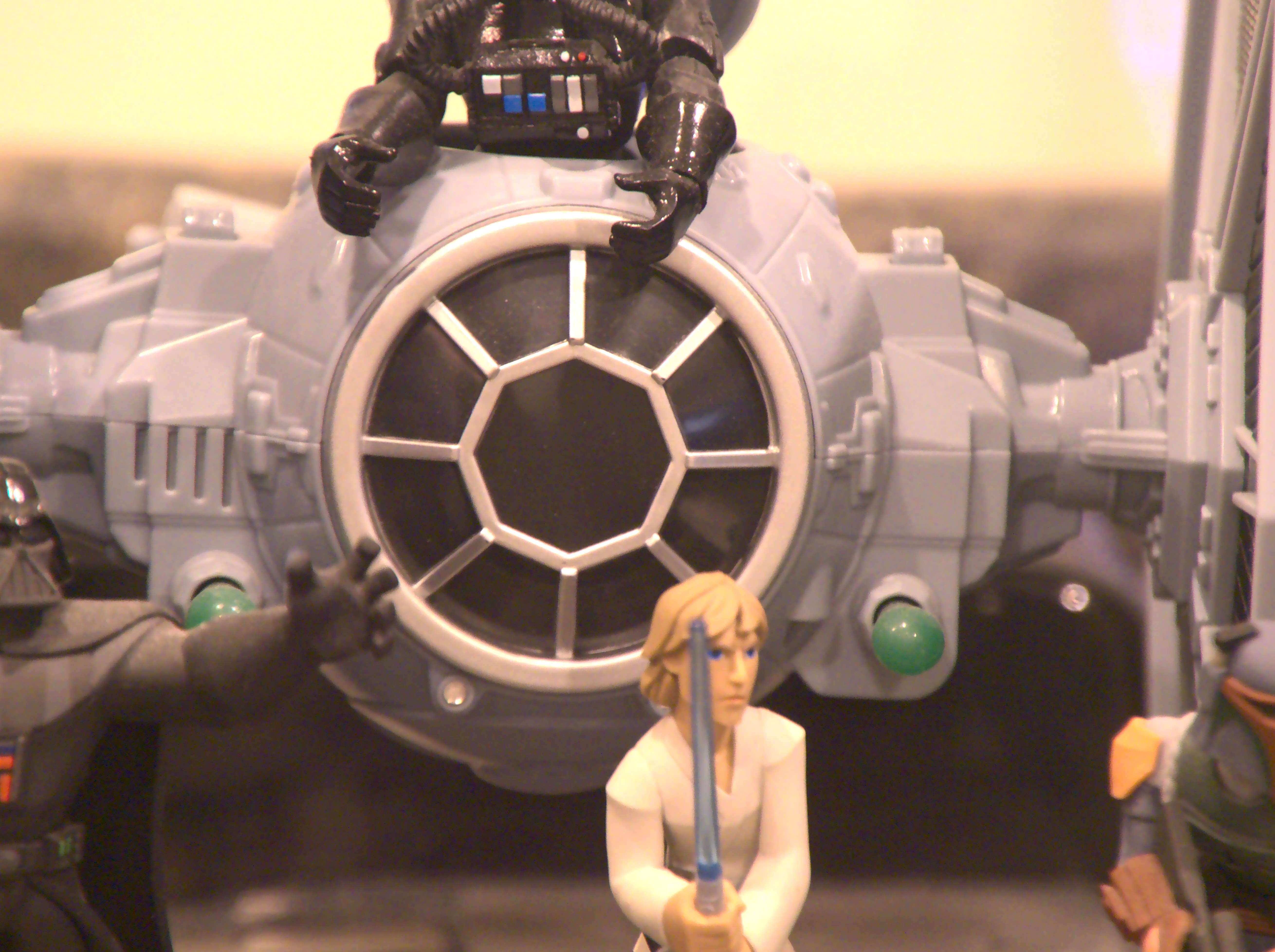 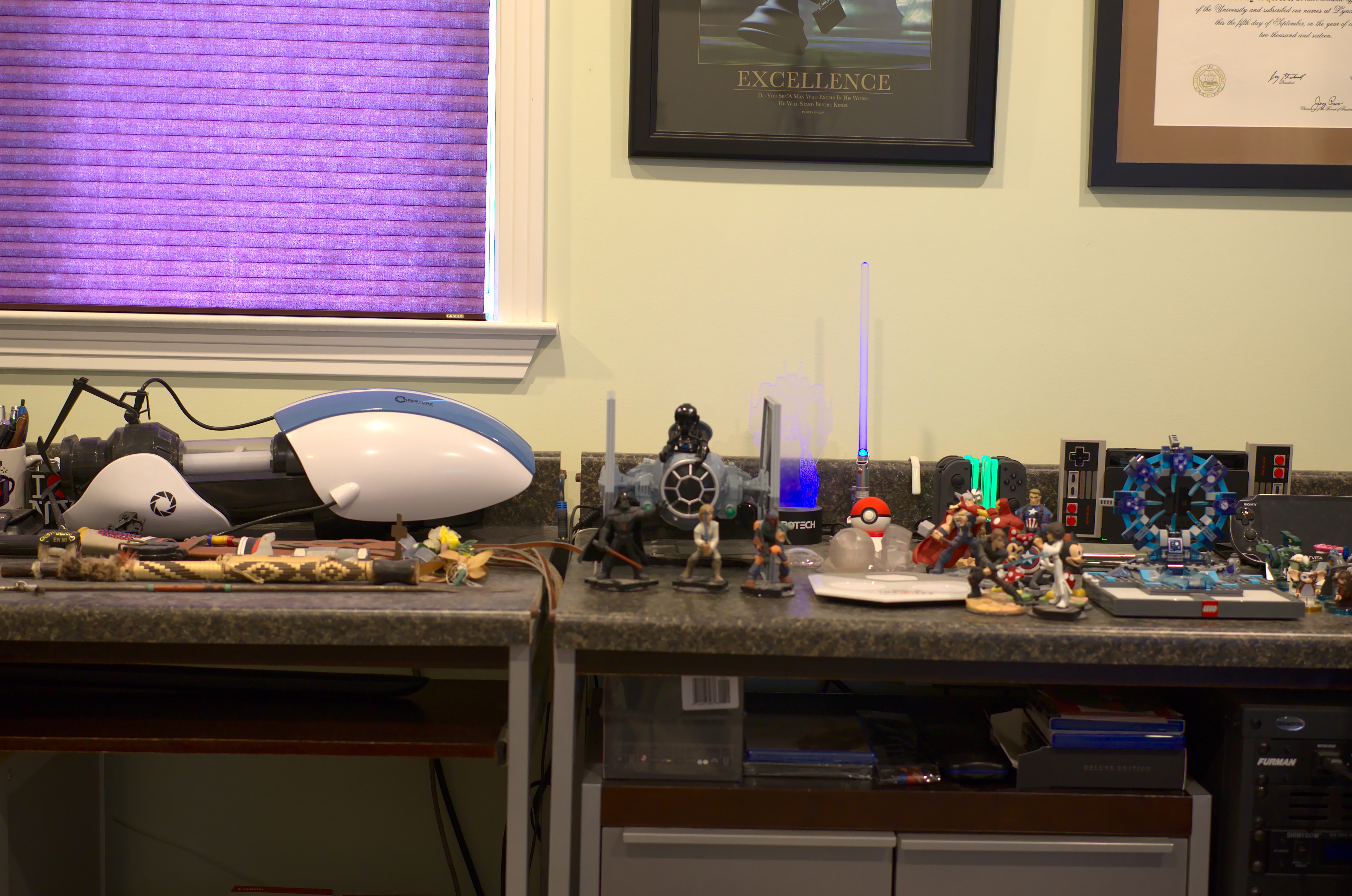 Nikon 35mm on E-M1 (Quick Manual Focus)
This was actually a bit tricky to shoot since the image on the viewfinder/screen was very dark - although there's probably a setting to fix that, so it's porbably not focused as well as it could be. 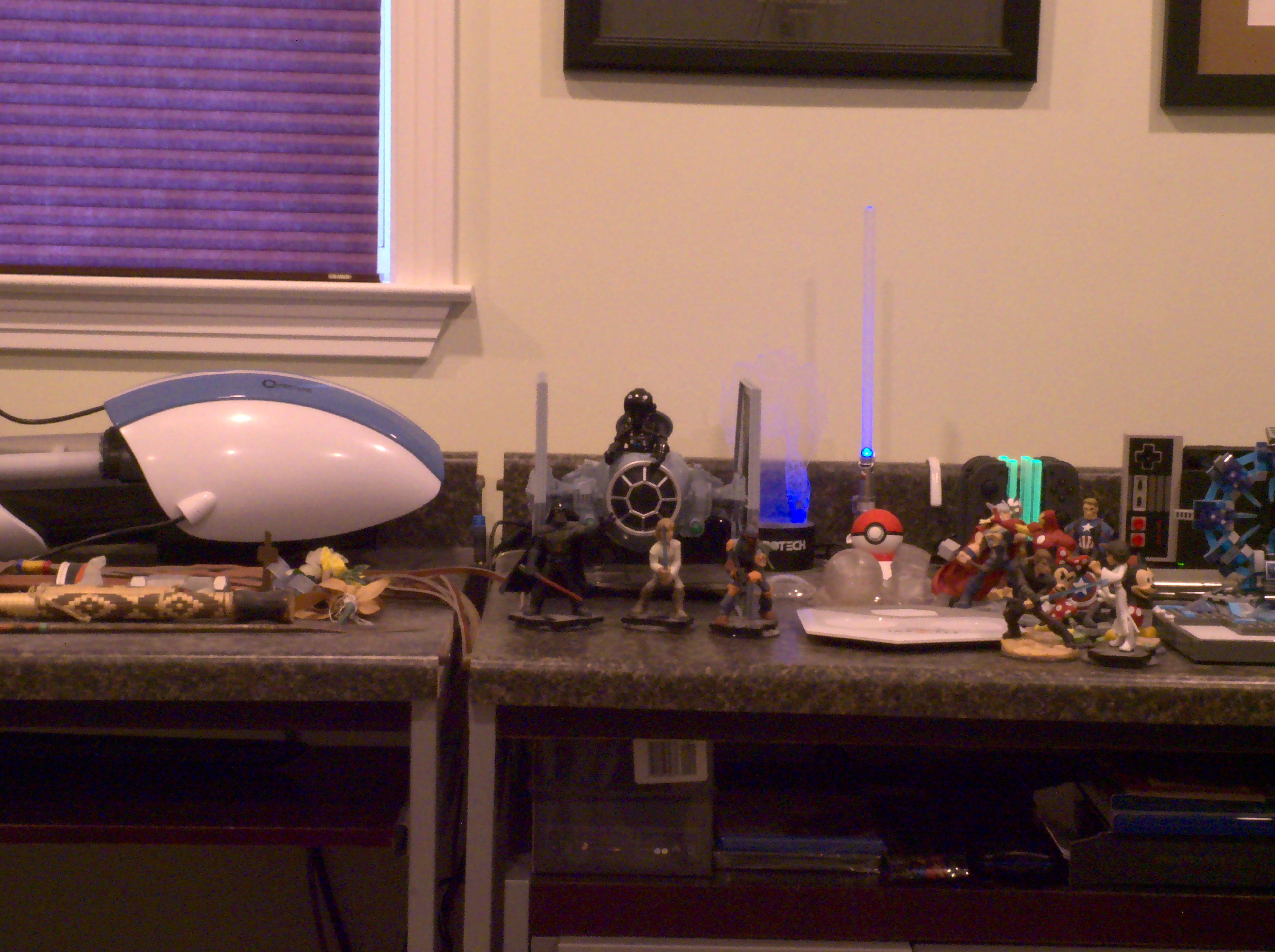 This was a fun test.
From the first set of comparisons it appears the lens is slightly more to the right on the Olympus (probably due to body construction and mount plate positioning and whatnot).
The wide is noticably wider on the Olympus lens, as expected.
The zoom is pretty close on both, with the Tamron having a slight edge.  I was actually expecting this to be more noticably different, considering the relative focal lengths.
I suppose the physical distance of the front element to the subject has a minor impact as well, but I'm not about to put that much effort into a quick comparison.  :)

I was surprised at how well the Tamron lens did on the Olympus body with the cheap adapter.
I doubt I'll ever use it there, but it's nice to know I have the option for that little extra reach, even if it is manual focus only, until I get get something higher in Olympus PRO glass.
Obviously I'm never going to use the Nikon lens on the Olympus body, but I had to test it for fun.

From a quick comparison of these images the Olympus lens seems a bit brighter and crisper than the Tamron.

So far I love the Olympus kit.  It's significantly smaller and lighter than the old Nikon kit, and the lens is great.
Now I Just need to get out and start using it.

Stay tuned for more images as I start using it, and for a little video demonstration/comparison once I get the cable to setup the Ninja!